Technicians use F-81 or ‘barrel connectors” to link coaxial cables together within satellite, antenna and, cable television systems. Often, little thought is given to the F-81 used 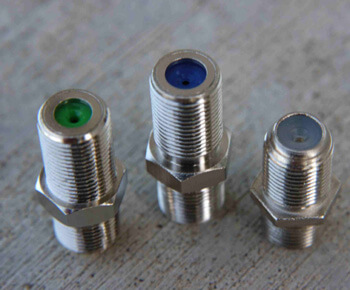 and things tend to work as expected. Satellite systems in particular, use high frequency signals. As satellite services increase offerings, so too does the bandwidth of the satellite system to transport these services. As bandwidth is increased, higher frequencies are employed to transport additional video channels and this challenges the integrity of the F-81 connector.

The familiar F-81 connector is a small threaded coupler with a PVC insulator surrounding center-conductor contacts. The body is generally just long enough to couple two F-connectors. The smaller size reduces the cost of the product. This type of F-81 provides acceptable performance in broadcast television (antenna systems) and cable television installations. Satellite systems however employ higher frequencies and use of the lower-cost F-81 connector in these systems degrades performance.

Improved F-81 connectors are longer and feature a well-machined mating surface with polished threads. The PVC insulator is replaced with a ceramic insulator. The longer body allows this F-81 to be used in variety of applications – from coupling cables to installation within wall plates. All of these features combine to provide good performance in high frequency systems as satellite. 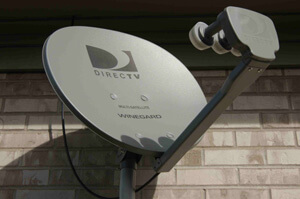 Antenna outlets are often overlooked as “cable connections” in the satellite antenna-to-receiver link. In fact, the TV outlet connection is simply another splice in the cable path. Most outlets are configured with the lowest-cost F-81 connector. A common indicator of F-81 trouble within the satellite system is the unreliable reception of some satellite channels. This is an especially good indicator when you know the F-connectors at the endpoints of the cable were replaced in an effort to resolve the reception problem but the condition persists.

The lower-cost F-81 connector found in the antenna jack of the television outlet insert or wall plate can easily replaced with the high-performance F-81. Nearly all antenna outlet covers and inserts have a seating position for the body of a standard F-81 connector. The F-81 connector configured with the outlet insert is removed and the new F-81 is inserted from the face. The retaining nut is treaded from the backside and the new F-81 is installed. A high-quality splice is formed between the receiver and the cable plant within the building. 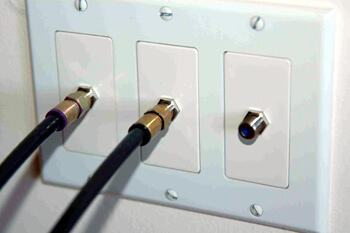 If you could see satellite signal transponders on a spectrum analyzer, you would recognize different signal levels within the satellite cable path. A good example is the DIRECTV™ high definition transponders that share satellite space with DISH Network™ signals at the 110 degree W. satellite position. The DIRECTV™ multi-satellite dish antenna is optimized to select transponders #8, #10, and #12 from among 16 satellite transponder signals. Using high-performance F-81 connectors anywhere a splice is required in the cable link maintains the integrity of the weaker satellite signals.

Selecting the best F-81 connector ensures that your installation meets the highest in performance. This is especially important where high frequency signals such as those in DBS satellite systems transport hundreds of video and audio channels from the dish antenna to the satellite receiver.